# 4 ~ Saint John's Ward and Kensington Market, Then and Now

Toronto is often referred to as one of the most culturally diverse cities in the world.  According to a 1981 census, visible minorities made up only 13.6% of Toronto's population.  According to a census tabulated 25 years later, in 2006, people born outside of Canada make up 49.9% of Toronto's population, with visible minorities making up 46.9% of the population.  It's estimated that by 2017, today's visible minorities will no longer be minorities at all, but will in fact make up the majority of Toronto's population.  Today, emergency service operators in Toronto can already respond in over 150 languages.  English, Chinese and Italian are the three most commonly spoken languages in Toronto.
Certain areas of the Toronto have become associated with various ethnic groups.  Eglinton Avenue West, between Allen Road and Keele Street, is home to "Little Jamaica", with a number of businesses of either Jamaican or various other Caribbean origins.  "Little Italy", centred on College Street between Bathurst Street and Ossington Avenue, as well as the "Corso Italia", on St. Clair Avenue West between Westmount Avenue and Lansdowne Avenue, both cater to Toronto's large Italian populations.  "Little India" lies on Gerrard Street, between Greenwood Avenue and Coxwell Avenue.  There are many shops and restaurants owned by those of Indian, Pakistani, Bangladeshi, Afghani and Sri Lankan origins.  Along with New York's Jackson Heights neighbourhood, and Chicago's Devon Avenue, Toronto's "Little India" on Gerrard Street is one of the largest South Asian markets in North America.
"THE WARD"
Historically, one of Toronto's earliest multicultural communities was a section of St. John's Ward.  This was one of the municipal wards that early Toronto was divided up into, and although officially known as "St. John's Ward" it was often much more commonly referred to simply as "the Ward".  It's boundaries were Yonge Street in the east, University Avenue in the west, College Street to the north, and Queen Street to the south.
Near the southeast corner of the ward, roughly where Bay and Albert streets meet up today - so, at Nathan Phillips Square - lay the heart of old multicultural Toronto.  An early immigrant to Toronto named Thornton Blackburn (who definitely merits a future entry of his own) escaped to Canada with his wife Lucie in the 1830s.  They had fled slavery in the United States, and had they returned, they would have undoubtedly faced execution in the United States.  But in Toronto, they found not only sanctuary but prosperity.  Thornton began working as a waiter at Osgoode Hall, and heard a group of lawyers talking about a fantastic new form of transportation that they'd ridden in, in Montreal.  It was a taxi cab.  Thornton Blackburn took the idea and opened up Ontario's first taxi cab company, and the rest was history.  Though finanically successful, he never forgot where he came from.  He began buying up property in the Ward, and built inexpensive housing for other escaped slaves in the neighbourhood.  By the 1850s, there was a large Black community, many of whom were escaped slaves, living in the Ward, approximately around where today's Nathan Phillips Square stands.
In the 1800s, there were Jewish settlers in Toronto, most of whom came from Western Europe or the United States.  However, for several years, there was no major influx, and without a large Jewish population, there was no cluster neighbourhood to be formed.  However, in the 1890s, there was a surge of Jewish immigration from Eastern Europe.  Many were poor and had only a thin grasp of the English language.  They moved to the Ward, too, and became its new cultural majority.
﻿
Nathan Phillips Square itself is part of Toronto's Jewish legacy.  It's named, of course, after Nathan Phillips, who entered municipal politics in 1926.  Eventually, he served as Mayor of Toronto from 1955 until 1962, for  a total of thirty-six years in civic government.  He was ending his term as mayor just as the great concrete piazza of his square was opened to the public.  Phillips was the first Jewish mayor of Toronto; in fact, every mayor before him, dating back to the city's incorporation in 1834, had been a Protestant Christian.﻿  As mayor, Phillips led an attack on the built heritage of Toronto, demolishing a vast number of heritage buildings in order to modernize the city.  The old armoury on University Avenue, just north of Queen, was destroyed in Phillips' campaign to modernize, as was the provincial viceregal estate of Chorley Park.  It was Phillips who finally had the slums of the Ward demolished, and he saw Toronto's main multicultural district moved west to Spadina.  Phillips led the campaign to construct the New City Hall, and there were threats to demolish Old City Hall which fortunately were never carried out.  Under Phillips reign, it was a bleak time for heritage conservation in Toronto.
Later, between 1900 and 1925, what is now Nathan Phillips Square became the home of Toronto's first Chinatown.  The first documented Chinese man living in Toronto was named Sam Ching; he is recorded as owning a laundry business on Adelaide Street in 1878.  There were restrictions on immigration from China until the late 1880s, but eventually, more people of Chinese descent began to move to Toronto.  This first real Chinatown in Toronto was centred down Elizabeth Street, which runs just west of Bay Street.
In the late 1940s, after the Second World War, the City of Toronto started buying up land in the area, and encouraging the Chinese inhabitants to leave.  Plans were already underway for a new City Hall building, and most of old Chinatown had been torn down by about 1955.  The businesses that couldn't afford to move closed down, and those that could relocate moved to Dundas Street West and Spadina Avenue - the area that we commonly think of as Toronto's downtown Chinatown today.
Old photographs from the early 20th century graphically depict the poor living conditions in the Ward.

KENSINGTON MARKET AND MODERN MULTICULTURALISM
From a Black community, to a Jewish one, through it's time as Toronto's first Chinatown, "the Ward" was Toronto's original multicultural community.  It was only during the second half of the twentieth century that multicuralism moved to Spadina Avenue's Chinatown, and it's next door neighbour, Kensington Market. 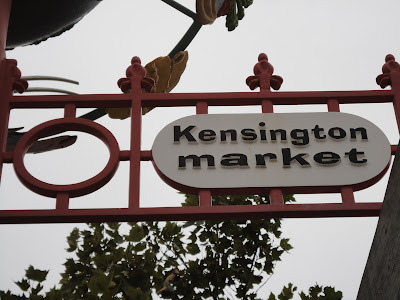 In general terms, the Kensington neighbourhood is considered to be bounded by College Street to the north, Queen Street West to the south, Spadina Avenue to the east, and Bellevue Street to the west.  The heart of Kensington Market, though, is considered to be up and down Augusta Avenue, Nassau Street, Kensington Avenue, St. Andrew's Street, and Baldwin Street.  Although vehicular traffic is permitted, all the regular conventions against jaywalking are ignored, and the area is best seen on foot.  It's one of the most pedestrian friendly neighbourhoods in Toronto, and walking through Kensingtion Market gives you the freedom to stop in and explore all of the small shops that make up the area.

Most of the area that makes up the larger Kensington Market neighbourhood was originally owned by an early Torontonian named George Taylor Denison.  Denison was a military man who served in the militia in the War of 1812, helping to guard against American invasion.  About 1815, just after the war ended, he bought a large area of land, the approximate boundaries of which would be modern day Augusta Street to the east, Lippincott Street to the west, Queen Street West to the south, and Bloor Street west to the north.  He continued with his military career, and actually raised his own regiment of volunteer cavalry.  He used the site of modern day Bellevue Square Park as a parading ground.  The practice came in handy as Denison's troops were used against William Lyon Mackenzie's followers during the Rebellion of 1837.

Denison had built himself a house in the neighbourhood, and he called his estate "Bellevue".  Denison died in 1853, but streets like Bellevue Avenue and Denison Avenue whisper out the secret of his legacy to modern Torontonians.  After Denison's death, his large estate was subdivided.  By the 1880s, affordable housing had been built on small plots of land in the area, and the first wave of immigrants - mostly of Irish or Scottish background - began to settle in the area.  These small, affordable homes would be passed down through the hands of successive waves of immigrants in the next few generations.


KENSINGTON AND THE JEWISH MARKET
Even before Nathan Phillips gutted the Ward, Toronto's newcomers had been spreading west from the traditional multicultural community centred around modern New City Hall.  By 1910, the Ward had become overcrowded, and the city's Jewish population began moving west towards Kensington Market.  The Jewish population in Kensington swelled into the tens of thousands in the 1920s and 1930s, and a number of synagogues were opened.  Immigration also impacted commerce, of course, and a number of Jewish tailors, bakers and other shops opened up.  The primary industry that these early Jewish settlers seemed to favour was the garment industry.  The Jewish community provided Toronto with its first "recycling" service.  Self employed workers known as "rag and bone Men" would go door to door, picking up unwanted pieces of cloth and bits of bone.  These were in turn sold off to garment manufacturers; the rags would  be transformed in to new clothing and the bones would be recycled and used for things like buttons.  The rag and bone men were eventually put of business when the city took over Toronto's waste management.  Eventually, many Jewish families made their fortunes and moved to much more wealthier Toronto neighbourhoods, like Rosedale or Forest Hill.


In the middle of the twentieth century, other multicultural communities started to find their way into Kensington Market.  Spadina, the market's eastern boundary, is home to the Chinatown that went up after the Ward was torn down.  A large Italian community had settled into Kensington Market early on, but after they met with success in the construction industry, they moved north to areas like Woodbridge.  In the 1960s, Canada increased immigration from the Caribbean.  Many of the early Caribbean women who moved to Canada worked as domestic labourers, and lived in the Kensington Market neighbourhood.  At this time, too, others from Eastern Europe, Asia, and South America started to migrate to Kensington Market.  Kensington Market was made a National Historic Site in 2006, and today is a melting pot for a number of different cultural identities.

Today, Kensington Market has a very positive, upbeat and Bohemian vibe.  It is a testament to the adversity that Canada's newcomers struggled through in the early twentieth centuries.  Living conditions for the working poor in old Toronto was often dreadful, and it wasn't until well into the 1900s that government agencies and community groups struggled to bring in some kind of reform.

KENSINGTON MARKET ABOUT 1970, AND TODAY
Eventually, Kensington Market was scoured of its impoverished reputation.  Today, it's known as a pedestrian commercial area, and its shops represent the cultural diversity of Toronto.  Kensington Market is full of clothing stores, fruit and vegetable stores, cheesemongers and fishmongers.  Stores carry supplies imported from or inspired by the Caribbean, South America, Europe, and Africa.

The next dozen photographs show Kensington Market in about 1970, and the rest are contemporary photographs from 2010. 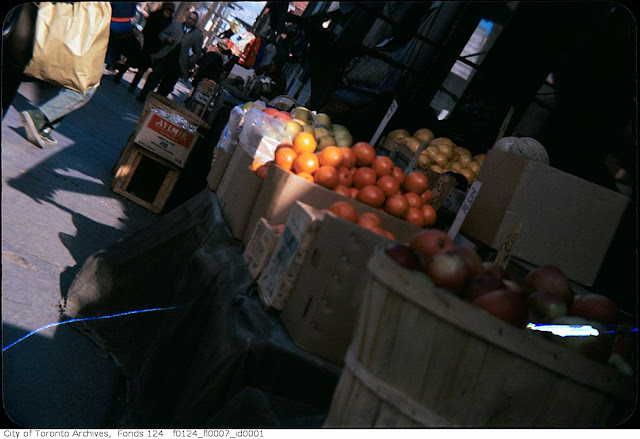 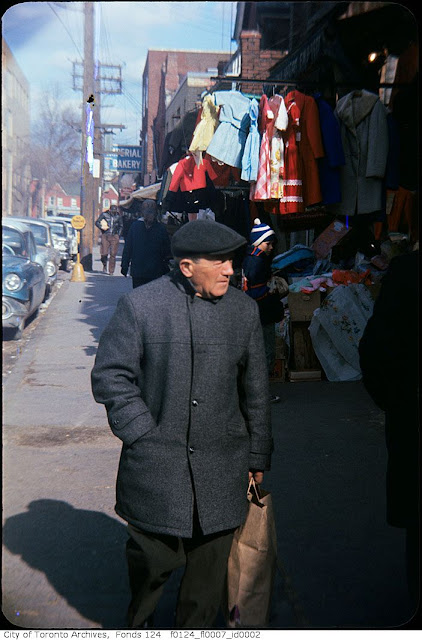 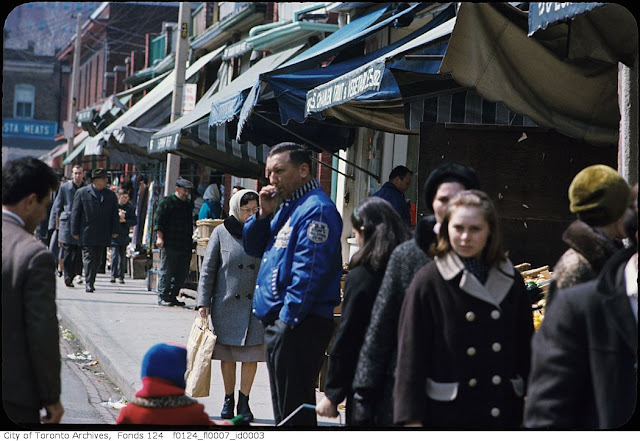 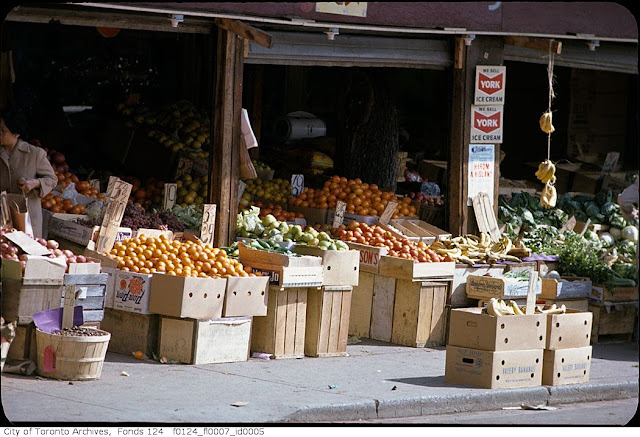 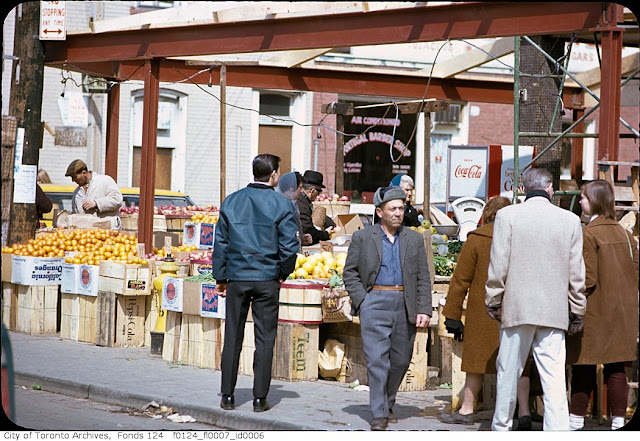 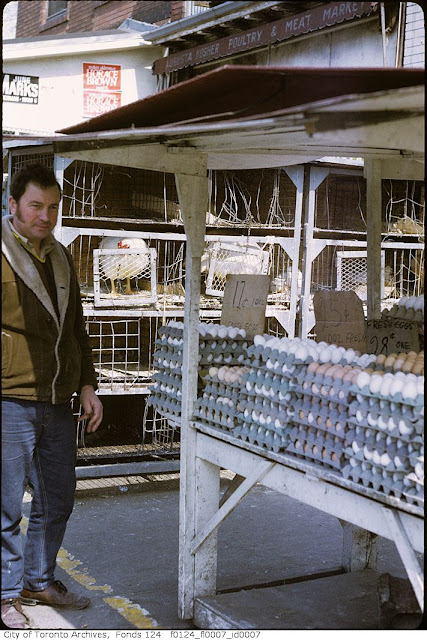 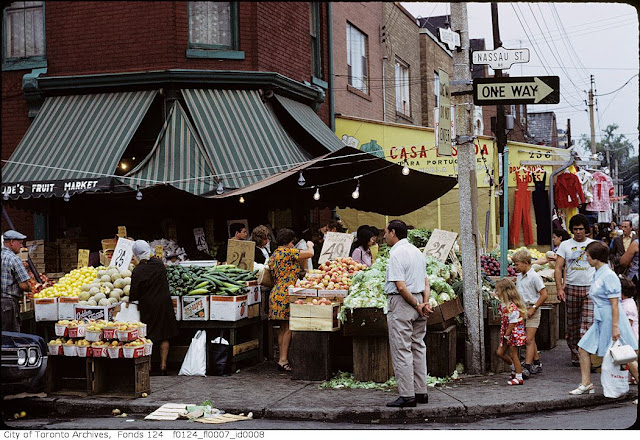 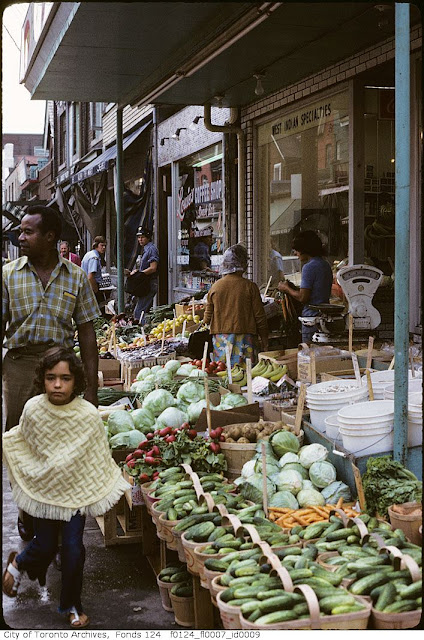 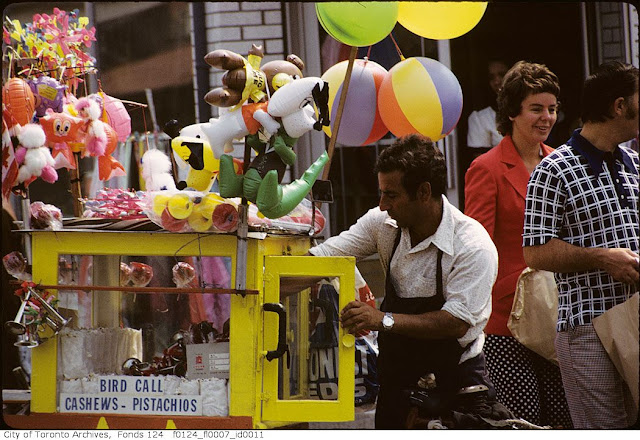 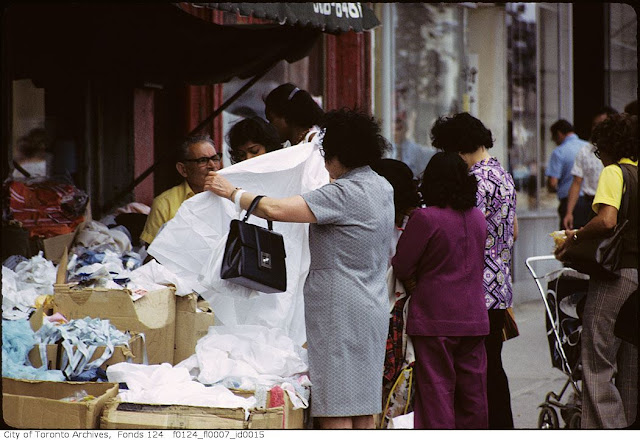 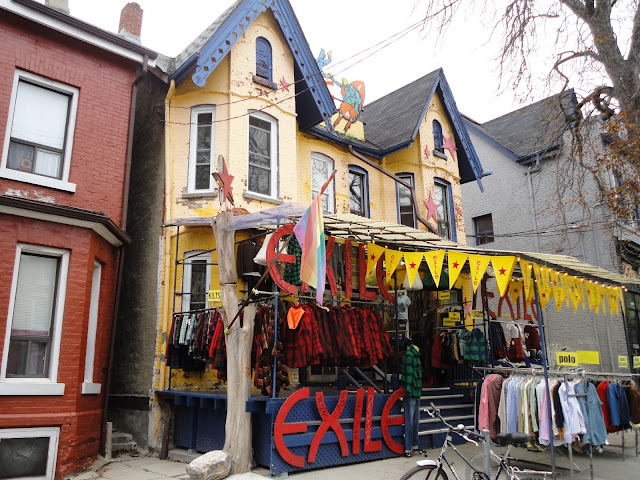 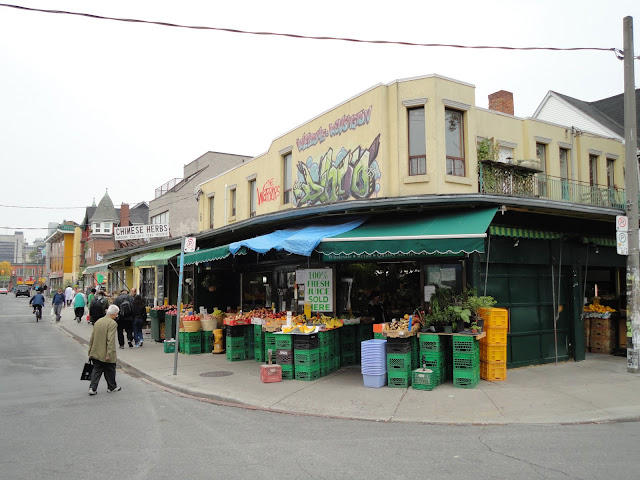 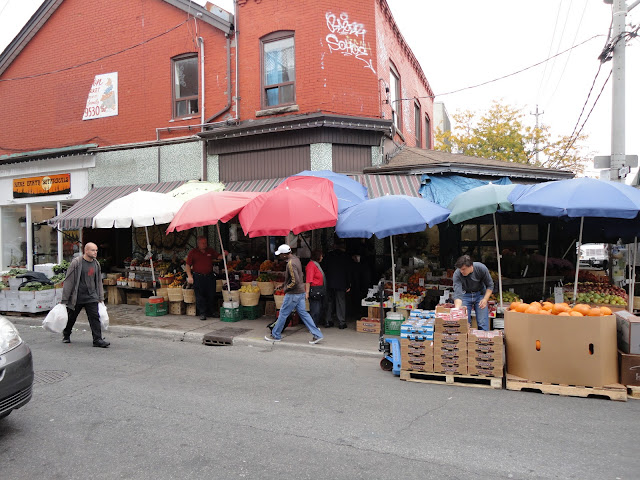 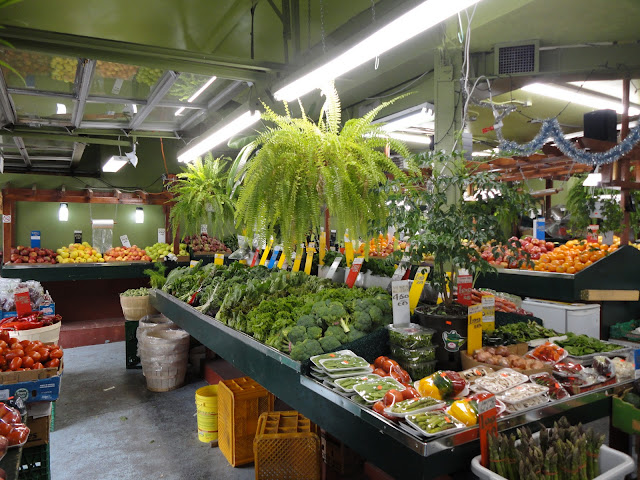 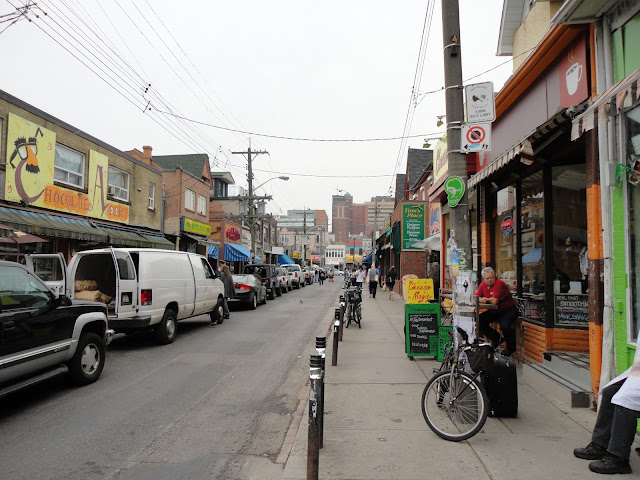 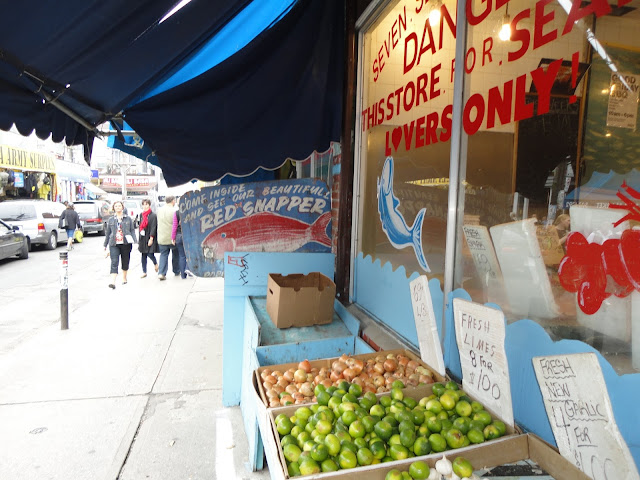 A short video clip of a contemporary Asian grocery market, on nearby Spadina Avenue.
Posted by Richard at 10:07 PM