On August 11th, 1930, Torontonians stared up at the skies and saw a new model of airship hovering over the city.  Airline designers hoped that this new airship ~ the British built R 100 ~ would herald a new age in commercial flight across the Atlantic.﻿

An airship, or dirigible, is a "lighter than air" aircraft that stay up in the air by means of a large balloon, technically known as an "envelope", filled with gas.  The gas must be less dense than the atmosphere around it.  In the early days of airships, hydrogen was used, although hydrogen was found to be too highly combustible, and could lead to disastrous results.  The most famous of these hydrogen-filled airship disasters was the burning of the Hindenburg in 1937.  Airships today are filled with helium.

Airships are identified as belonging to several different categories.  Non-rigid airships, or blimps, are smaller airships without an internal skeleton.  Semi-rigid airships are somewhat larger, and have a partial frame inside.  Rigid airships contain a full internal skeleton, and as they are much larger, they were used for much longer voyages, and were capable of transoceanic flight.  Smaller airships, with less internal framework, are still seen today, and are mostly used for advertising or for hovering over stadiums to film sporting events.  The "Goodyear Blimp" is an example of this kind of airship ~ actually, there are currently three blimps in the Goodyear fleet.  In partnership with Zeppelin, Goodyear started manufacturing airship envelopes in 1911, and brought out its own blimp, The Pilgrim, in 1925.

Manned balloons have been in operation for hundreds of years, with propulsion being added later in the nineteenth century.  The so-called Golden Age of the airship came with the dawn of the twentieth-century.  It all began in July of 1900, with the launch of the Zeppelin LZ1.  Named after the German Count von Zeppelin, the Zeppelin models would become the most successful airships ever manufactured.  Research and development led to more and more improvements, and by the start of World War One, Zeppelin's airships had develeoped a relatively sturdy framework, separate gas shells, tail fins that aided in control and gave stability, and multiple engine and crew cars that hung beneath the envelope.  A passenger car was situated between the crew cars, and during the war, these were converted into bomb bays.  The airship took on an offensive purpose during the First World War, and were also used to spy on and document enemy positions.

The name Zeppelin, along with the burning wreck of The Hindenburg and the popular appearances of the Goodyear Blimp have made us passingly familiar with German and American airships, but British airship builders got into the production race after the Great War.  Like many other technologies that were refined in the crucible of war, airship technology had advanced and thought was given over to converting the airship into commerical use.  The Airship Guarantee Company was founded as a subsidiary of Vickers-Armstrong, a British munitions production company.  A noted aeronautics designer named Barnes Wallis was brought in to help design a new commerical airship.  Wallis would later go on to put together the Vickers Wellington bomber and invent the "bouncing bomb" ~ a barrel shaped bomb built to bounce across water and avoid defensive obstacles like torpedo nets.

The goal was to build a rigid airship that would serve the commercial aviation routes of the British Empire.  Vickers-Armstrong hoped that a new airship could offer an affordable, comfortable and frequent trans-Atlantic traffic route.  Company officials estimated that airship flights back and forth between the United Kingdom and Canada could be offered for as little as £45 (around $215 American).  The same trip, onboard a passenger ship, cost £115 (about $550 American).  Being able to offer the novelty of flight, before the mainstream advent of commercial airlines, at less than half the cost of a trans-Atlantic cruise, would give up an obvious commercial advantage.

Design of the HM Airship R100 began in rural Yorkshire in 1925.  The project was plagued by difficulties.  Construction took place on a remote, rundown airfield.  Because construction took place in a rural area, skilled labour was hard to find.  The construction shed had a leaking roof, and was unheated, so ice formed on the metal in the winter, and even in warmer seasons, condensation and dampness made for corrosion of the airship's metal frame.  Eventually, though, the work was finished, and although the R100 was not as technologically innovative as her designers had hoped, she made her first flight on 16 December 1929.  The R100 flew from the airfield in Howden to York, then changed course for an airfield in Bedfordshire.  The airship was propelled by six Rolls Royce Condor engines; she used four of the six engines in her initial flight, and cruised along at an average speed of 80 km / hour.  At a speed trial conducted on 16 January 1930, exactly one month after her maiden voyage, the R100 reached 130 km / hour, breaking the records and making her the fastest airship in the world.  The R100 looked a little ungainly at top speeds.  There were relatively few supports in the airship's infrastructure, so excessive speeds made the outer, unsupported fabric ripple and flap during flight.

The time had come to show off the technological prowess of the R100 on a long voyage.  Originally, plans had been made to fly the airship to India.  However, during the development of the airship, specifications had changed.  The originally planned for diesel engines were not installed, and petrol engines were used instead.  It was thought that a flight to India, through such a hot climate, may result in the combustion of the petrol on board, which would have been disastrous.  Instead, Canada was chosen as a destination.


The R100 left for Canada on 29 July 1930, covering approximately 5,300 kilometres at an average speed of 68 kilometres an hour.  The airship arrived at a mooring mast in Saint-Hubert, Quebec in 78 hours, and stayed at Montreal for twelve days.  Crowds of up to 100,000 people visited the airfield every day, to take in the wonders of modern aviation.  Here, it was hoped, was the future of affordable trans-Atlantic flight.  Mary Rose-Anna Travers, an early French Canadian folk singer often known today by her nickname of "La Bolduc" wrote a tongue-in-cheek song lampooning the great interest of local crowds in the R100 airship.


After Montreal, the R100 departed for a 24-hour passenger flight to Ottawa, Toronto and Niagara Falls.  It as on 11 August that she spent some few short hours hovering over Toronto.  Then, she returned home to England, arriving there after a flight of just under 58-hours.  It would seem that the trans-Atlantic flight of the R100 to Canada was a success.

The R100 did have a sister ship, dubbed the R101.  It was built simultaneously along with the R100, and the two design teams, one working on each of the two airships, were very much in competition with one another.  Moved by the successful Canadian voyage of the R100, the R101 took up the flight to India.  It was the R101 that carried diesel engines, not petrol, so it was thought that the risk was small enough.

The R101 was tested alongside the R100, in 1929, and on the evening of 4 October 1930, the R101 departed for her destination in India.  The R101 had spacious passenger accomodations.  There were fifty passenger cabins, a dining room that could seat sixty people, two enclosed promenade decks that were lined with windows, and even a smoking room, lined with asbestos, that could accomodate two-dozen people.  The washrooms, kitchens, cabins and dining rooms were built with the future of comfortable air travel in mind.  It all came to a tragic end the next day, when the R101 floundered and crashed over France on 5 October 1930.  Forty-seven of the 55 passengers and crew on board the R101 were killed instantly, with another crew member dying of his injuries.  The loss of 48 lives in the R101 disaster was greater than the loss of life on The Hindenburg, which would crash in 1937.  The R101 disaster of 1930 would effectively end the British Imperial Airship Scheme.

These huge trans-Atlantic airships, like The Hindenburg, the R100 and the R101, were the first aircraft to allow for controlled, powered, and propelled flight.  They paved the way for today's airlines, but their demise was set by both the rise of the airplanes, which surpassed the capabilities of old style airships, and the terrible airship disasters of the 1930s.

After the R101 disaster, her sister airship, the R100, which had once graced the skies over Toronto, was ordered grounded.  The R100 was deflated, with the fabric of the envelope hung in a shed while a decision was made of what to do about the ship.  Should work continue on the programme?  Should the work that went into the R100 and R101 lead to the development of a R102?  A decision was finally reached in November of 1931.  The metal framework of the R100 was completely flattened by steamrollers and sold off as a scrap metal for less than  £600.

TECHNICAL SPECIFICATIONS OF THE R100 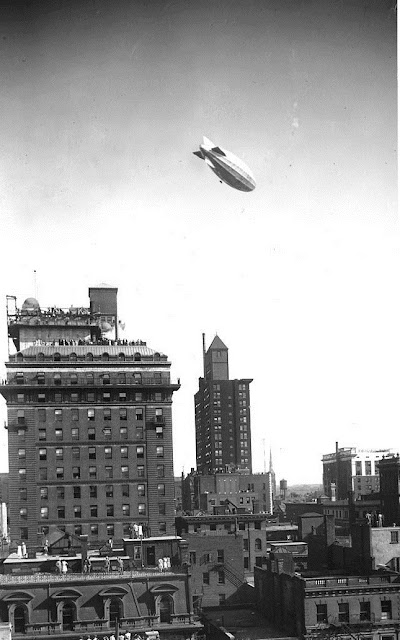 A reader named "Ken" sent me this incredible photographs, showing a pair of souvenir tickets that were issued to allow visitors to come and see the R100 when it was docked at the St. Hubert Airport, in Montreal, Quebec.

Thanks for sending them in! 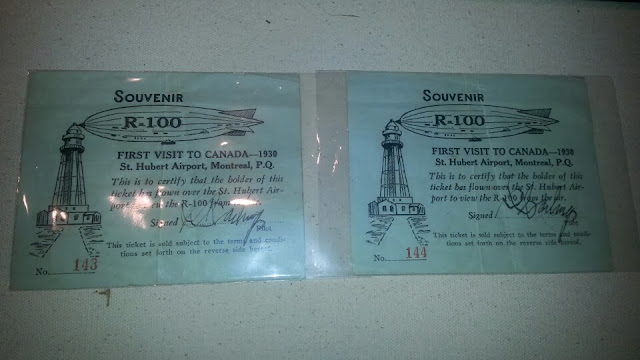 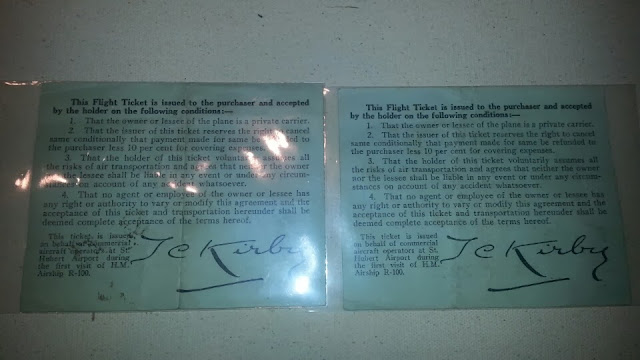